As we see the ongoing intrigues in the re-run election in Osun State, with a series of offers, stupendously huge enough to literally buy a whole Chief Omisore, whose war cry had earlier been: Christian, sell not your vote!; an even heavier titanic battle is going on in the United States. 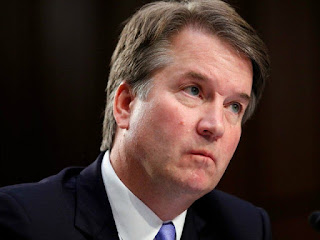 In a dual battle for the crucial Nov 6 mid-term elections (so critical, Trump riled China about it during the UN Security Council meeting); as well as the confirmation of a conservative Supreme Court nominee, Brett Kavanaugh.

It's incredible that obvious desperate would-be spoilers should be given such attention as the detractors of Mr Kavanaugh are being given.  With almost all his classmates attesting to an impeccable character, an outrageously unwarranted disproportionate attention is being given to one or two voices whose only cry is for FBI investigations - which of course would derail the voting and final confirmation of Mr Kavanaugh before the epic Nov 6 elections.  Copied from an ongoing intense commentaries from Breitbart [https://www.breitbart.com/big-government/2018/09/26/live-updates-avenatti-circus-throws-brett-kavanaugh-confirmation-into-chaos/] is this posting quoting an outraged Kavanaugh. It is a fitting description of the ongoing saga:


The New York Times says as recently as last week, she  was calling around to other classmates saying she wasn’t sure I had done this. And you know, I think — I think we’re — this is an outrage for this kind of thin, uncorroborated, 35-year-old accusation to be leveled in this fashion at this time. I’ve been in the public eye for 24 years, since I started with the independent counsel in the fall of 1994, very public at various points in my life. I’ve been through six background checks. I worked in the White House at the highest levels, senior staff, traveling with the President all over the world, seeing the most highly sensitive secrets of our Nation for years. I went through a difficult confirmation process for the D.C. Circuit that was public with two separate confirmation hearings in 2004 and 2006.
I’ve been a judge for 12 years in a very public way. I’ve been identified repeatedly as a potential Supreme Court nominee. Whether that was accurate or not, I’ve been publicly identified. My decisions have been publicly discussed. I’ve been very much a presence at the Yale College reunions. I’ve been on multiple panels there. So I’ve been active in the class. The class newsletter has talked about me. The people in my class have been at those reunions and those events.
In all that time, not a word. And then 4 days, you know, when just right before a vote for the Supreme Court, after the nomination itself has been pending for months,  and I’ve been through the hearings and 65 Senate meetings and all the written questions, and then — and then, after all these years, with all this time, and all these descriptions with no corroboration and with her best friend saying she never heard about it, you know, I’m — I’m really just, you know, stunned. And outraged.