The Bible’s description of end-time scenarios are often derided by secular humanists – those who, buoyed by an incredible faith in evolution, boasts that mankind will only improve with time, and will eventually solve all the problems confronting it. Therefore, war, natural catastrophes, plagues and famine etc which the Bible predicts for the end-times are derided with the belief that such “mere evidences of under-development” would be totally dealt with by technology as time progresses endlessly. Taking the example of famine, science fictions are rife with new wonder products, packed with incredible amount of nutrition per unit mass, such that food will never be a concern again to mankind of the future. Of course such products will be mass produced from synthetic stuffs, thus banishing the very concept of global famine forever.

But what is the pathway to this utopian state? Secular humanists will with one accord affirm it is genetically modified products. That is, prior to complete synthetic production of foods, the naturally occurring foods will first be continually modified to bring out certain desirable characteristics – faster, bigger, more disease-resistant yields.
However, most thinking people recognize that it is this approach that will even more likely hasten the advent of the Biblically-predicted famine for the end-times ! Even if it is assumed that the corky scientists indeed know their onions and their new products will not have negative implications for our health or ecology (however see for instance, the article “50 Harmful Effects of Genetically-modified food at http://www.cqs.com/50harm.htm); the basic issue of patent rights and human greed often necessitates that these GM products are sterilized – that is in the few cases where they are not already sterile as a result of the genetic manipulations. This then means that as these products increase in popularity and the naturally occurring ones (bearing viable seeds) disappear, we all would become more and more dependent on the suppliers of these new wonder products for food from year to year. What a perfect set-up to introduce global famine!

But the grand backers of this scheme, blinded by their passion to exert total control on all mankind in their quest for one-world governance, are adamant that genetically-modified products must be foisted on mankind . The current largely man-made famine (outcome of a mad rush into a carbon dioxide-free environment) might indeed be the on-set of the real coming catastrophic famine – precisely because, it is set to lead to the release of an avalance of GM products onto the world.

See also the article by F. William Engdahl at www.globalresearch.ca/index.php?context=va&aid=7529
Posted by CHURCH ARISE! at 10:46 AM No comments:

The impending US elections are obviously of global interest. Even though a dying superpower, the US still remains the only one at the moment. And the fact of its increasing numerous socio-economic problems only make the election even more crucial!
As a Christian, one would wish for a stable US. Basically as the only remaining viable opposition to the advances of global governance advocates, who must destroy national sovereignty before they could implement their programmes in preparation for the anti-christ, the US is prime target for these forces. The agenda for the destruction of the US has been under implementation for over a century; and it seems the climax is now here. The choice of who leads the United States in these trying times is therefore most crucial.
The Republicans used to be the evangelical church’s choice – leading the war against liberal tendencies as homosexuality, abortion, earth-worship, secular humanism, evolutionism etc; as well as fighting to maintain a constitutional sovereign government for the United States. However, with the US Church seriously compromised as it is, the Republicans appear to be seriously destabilized and fragmented, giving the Democrats a fairly good chance of taking over at the White House this November.
That leads to two hypes: the first female or the first black president? As we have noted in previous articles, the key force in play here is that of global governance – see for instance Rev. 17:17 to confirm that the Lord is allowing these folks to call the shots that will end in their being caught in their own conceits. We know relatively little about Obama’s ranking with these forces, but we would guess that Hillary Clinton - supposedly a 3rd degree witch, and given the deep involvement of her husband and her with the global governance movement – would tip the balance with this satan-inspired group.
Thus, even though Obama seems still to be sticking to his lead in the public domain, despite his many ups and downs, with Hillary Clinton even reportedly acknowledging he might end up being the eventual president, the race is still clearly open. No one certainly could underrate the forces behind Obama. It clearly is not possible to just move out of relative obscurity and become the leading candidate for the office of the US presidency without unusual strong backings. Yet we will not be surprised at all if the same group of forces that edged out Kerry in favour of George W. Bush in 1999 still end up installing Hillary, the call will be close of course, at the White House.
If this happens, then the presidency of the most powerful nation on earth would be staying for probably eight more years within just two families (Bush and Clinton) where it has been passed around for the past 24 years! Both families are reported to have emerged from the same campus cult – the Skull and Bones, at the same Yale University. It’s incredible that American democracy could not find better candidates for the highest office in the land among its 301 million population outside these two families!
Posted by CHURCH ARISE! at 10:25 AM No comments:

DEATH OF A GURU

I would like to recommend the following article by Gary Bates on the recent demise of the enormously popular science fiction writer, Sir Arthur C. Clarke. 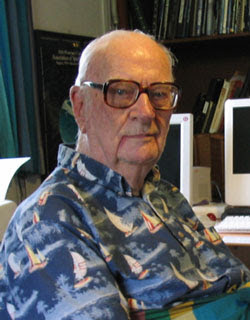 Death of a guru

Sci-fi writer leaves a legacy … but what?

Recently, news reports told of the death of the hugely popular science fiction writer Sir Arthur C. Clarke (1917–2008). So famous is Clarke—the author of some 80 books—that his popularity extended into many non-English speaking countries. This demonstrates the enormous popularity of science-fiction as it carries universal themes such as the hope and vision of a more ‘enlightened’ and peaceful future. Indeed, one of Clarke’s enduring themes was for a world free of religious ideology, and he saw creationists, in particular, as irrational bigots, and they often came in for criticism from him. He once said:

‘I have encountered a few creationists and because they were usually nice, intelligent people, I have been unable to decide whether they were really mad, or only pretending to be mad. If I was a religious person, I would consider creationism nothing less than blasphemy. Do its adherents imagine that God is a cosmic hoaxer who has created that whole vast fossil record for the sole purpose of misleading mankind?’1

As brilliant as he may have been regarded by his legion of fans, this demonstrates that he held to no more than an ignorant parody of what creationists actually believe. In short, he is really saying that anyone who believes in creation is stupid. For such a talented man this comment was really a poor show. I am certainly not trying to disparage Clarke on the event of his untimely death, but the blogs are already lauding his legacy. I am trying to highlight that Clarke’s own disparaging words about creationists will no doubt be rolled out and taken as ‘gospel’, as he is eulogized all over the world due to many being swept up in the tide of emotion.

In interviews, Clarke consistently expressed his wish for evidence of extraterrestrial life

Clarke’s comment about the fossil record was unfortunately ‘willingly ignorant’ (2 Peter 3:5) about what the fossil layers actually represent from a creationist perspective. The overwhelming evidence of catastrophically formed geologic, fossil-bearing layers is a key to understanding a Christian’s Bible-centered worldview. Clarke was not alone in his ignorance. Many are very surprised to discover that Christians actually have answers to such non-existent problems. Not bothering to find out what people really believe before criticizing them is really a form of bigotry in itself—the very thing Clarke accuses Christians of.

The entire article could be found at http://www.creationontheweb.com/content/view/5685
Posted by CHURCH ARISE! at 10:51 AM No comments: