LIVINGSCIENCE FOUNDATION: RESPONSE TO NAFDAC’S STATEMENT ON USE OF MERCURY-CONTAINING CHILDHOOD VACCINES IN NIGERIA 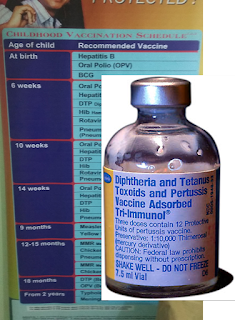 Summary: NAFDAC’s current regulations will not permit in a body lotion, the level and form of mercury it claims to be harmless in some vaccines being administered to children.

Copious news reports have brought to our attention a Press Release  issued by the National Agency for Food and Drug Administration and Control (NAFDAC) on 24th October, 2022.  The Release attempts to underplay the indisputable fact that vaccines, in formats long-proscribed in the developed nations, on safety considerations, are still being shipped to Nigeria for use in our children.

The NAFDAC’s Press Release was craftily directed at an uncited media “statement” which supposedly claimed that the mercury content in the vaccines in question is 40%. The focus of the Release was thereafter directed at this wrongly quoted value.  In actuality, it is thimerosal that contains 49.6% of ethyl mercury, while the concentration of thimerosal in vaccines could range from 0.003 to 0.01% as correctly stated in the NAFDAC’s statement.  Since the NAFDAC’s Release is obviously directed, ultimately, at submissions made at the recently concluded 7th National Conference on Environment and Health convened by us, we reproduce here, for the records, our exact statement on the issue.  Observation No 3 in the Conference Communique reads:

i. It was observed that while the use of thimerosal (49.6% ethyl mercury) as preservative in traditional vaccines had been proscribed in the USA for over 2 decades, and in Europe for more than 30 years, this practice is still ongoing in Nigeria.  This is based on recommendations stemming from Risk Assessment exercises carried out by foreign/global agencies.  Vaccines so affected include Hepatitis B and Tetanus-Diphteria multidose vaccines.  Mercury in all forms is known to be neurotoxic.

ii. By switching to single-dose forms of the same vaccine, as is done in the developed countries, the need for the use of thimerosal (as preservative) will be eliminated.

The full Communique can be obtained from http://conferences.lsfnigeria.org.

The issue is therefore not the wrongly-ascribed (possibly a typo) value of 40%  as mercury content in the vaccine  The 0.003 – 0.01% value quoted by the NAFDAC, while sounding miniscule as expressed in percentages, is actually humongous in trace elements toxicology. The upper limit actually translates to 25 microgram of ethyl mercury in a typical 0.5mL dose which could be administered, in the case of Hepatitis B vaccine, to day-old low-birthweight babies.  By comparison, the WHO recommended limit for mercury in 0.5 mL of waste water that can be used for agricultural purposes is 0.0005 microgram. That is 50,000 times lower than the mercury level in the vaccine!

The NAFDAC is certainly not unaware of the highly toxic nature of mercury.  Indeed the Agency has literally ZERO tolerance for mercury appearing, in any form, in all cosmetics and other household products.  A statement on NAFDAC’s website explains this proscription:

“Mercury is prohibited in cosmetics products because it can be harmful to health and can be absorbed into the body and causes damage to the kidneys and nervous system, as well as disrupt the brain development of young or unborn children…” https://www.nafdac.gov.ng/public-alert-no-007-2020-alert-on-ban-on-distribution-of-three-cosmetics-products-by-malaysian-ministry-of-health/

Deliberately loading babies, repeatedly, with such humongous amount of mercury is therefore clearly unconscionable. The practice was proscribed in Europe over 30 years ago, and despite considerable resistance by the formidable Vaccine Lobby, it was also proscribed in the USA some 10 years later.  Despite NAFDAC’s repeated claim of no evidence of harm, the sole reason for the proscription of these vaccines in the developed nations is SAFETY.

The NAFDAC attempts to befuddle this straightforward issue by repeatedly appealing to the World Health Organization.  According to the NAFDAC, since the WHO has not placed an outright proscription on the product, NAFDAC can continue to load the brains of Nigerian children with levels of mercury which would be unacceptable in waste waters and cosmetics.

And just to be clear, global bodies such as the WHO or the UNEP (United Nations Environment Programme) are primarily concerned with issues that traverse nations.  Using negotiations and consensus-building, acceptable middle-ground solutions that would least rock the boat are endorsed and recommended in the sensitive task of accommodating the widely different values and interests represented in nearly 200 member states.   It is left for each nation to decide on strictly local issues – such as how much mercury to pump into the brain of their babies.

For emphasis, it was not the WHO that proscribed the use of thimerosal in vaccines in the developed nations, but the national agencies - the equivalents of our NAFDAC – in those nations.  The WHO’s perspective for risk assessment of the continued use of thimerosal-containing vaccines is not by any means a secret.  It is clearly indicated in several technical articles, such as the one by Drain et al (2003) published in the official Bulletin of the WHO (Drain PK, Nelson CM, Lloyd JS. Single-dose versus multi-dose vaccine vials for immunization programmes in developing countries. Bull World Health Organ. 2003;81(10):726-31).  Simply put, if a nation considers herself too impoverished to afford safer single-dose vaccines which do not contain mercury as preservative, it is better to recommend they accept the morbid risk of impaired neurodevelopment in their children than the mortal risk associated with such infections as hepatitis, tetanus, and diphtheria.  And, of course, there is also the need to stabilize a sensitive global vaccine industry.

It is not our intention to by any means discredit the NAFDAC or take up issues with her.  This issue in question predates her by decades and there are several intimidating global players involved.  Our overriding concern is that health products which are not acceptable for use in the manufacturer/donors’ own children cannot be good enough for our own children and grand children.  We encourage NAFDAC to rather side with the Nigerian people and advise government on budgetary requirements to shift to the use of single-dose vials, or other upcoming innovations; such that Nigerians who require vaccines could continue to have them with at least the same relative safety enjoyed in other climes.

“That Thy way may be known upon earth, Thy saving health among all nations” - Psalms 67:2

Posted by CHURCH ARISE! at 9:43 PM No comments: