ALS 2021 VIRTURAL CONFERENCE IN A NUTSHELL

In lieu of the postponed Jerusalem meeting of the Africa Leadership Summit (ALS) which should have held this year, a virtual Conference themed The Quest for Godly Leaders and Righteous Nations   was held on Saturday October 23 and Sunday October 24.  On both days, the meetings were preceded by a 30 minute photoshow of 2019 ALS as well as another half hour of intercession and prayer for the Great Awakening.

Pastor Segun Olanipekun clearly spelt out the vision and strategies of the ALS for raising leaders to take over sectors and cities of Africa to accomplish God’s counsel in the endtimes.  He was upbeat that this seemingly impossible task would be realized, even in our time, by God’s predetermined infallible counsel.  Citing Isa. 59:19, Rev 12:2-5 and 1 Sam 1:11, among other Scriptures, Pastor Segun counselled that we pay less attention to the threatening floods of the enemy; and rather repose more confidence in what the Holy Spirit has determined to birth through us.

Starting with Psa. 82 Pastor  John Adejoroluwa carefully explained that it is God’s desire to possess/inherit the nations, but this will come only after they had been “judged”, by which is meant, made compliant with the divine blueprint.   He further explained that the primary qualification for those to be used for this task is sonship.  Government of nations is to be placed on the shoulders on “sons” of God, stars that shine even in the day, and not just “children” of God he emphasised.  According to Pastor John, one major judgement which must happen within the Church itself, is that of the spirit of Jezebel which, where allowed free rein, keeps “children of God” from maturing into “sons of God”. (Rev 2:20).

In a later comment, Pastor Segun pointed out, from Isa 55:4, that when such “sons” as described by Pastor John are commissioned for specific tasks, God calls them “Leaders.” Engr  B.U. Bassey, Apostle Linda Gobodo, Rev Bode Oluwusi, Pastor David Kaberere, and Sis Margaret Aduol  also briefly proclaimed the word of God and led prayers at various times during the Conference.

The main speakers at the Conference were the Berger brothers.   Reuven and Benjamin spoke passionately on the subject of Israel, the Church, and the endtimes which subject they have been studying for over 50 years.  Reuven’s talk was titled Signs of the Time, and interestingly, for more than half of the talk, he dwelt extensively on the significance of the COVID vaccine now being mandated over the nations.  In this regard, according to Reuven, Israel in particular has once again become the world’s spectacle; but this time not as a sacrificial lamb, but an experimental guinea pig!  Hopefully this very sobering talk would be eye-opening for those who yet have not grasped the full implication of an unprecedented brazen mandate of an experimental injection despite several significant undeniable flaws associated with the product.

Other signs pointed out by Pastor Reuven included the strident attacks on the family and education, the rising impacts of artificial intelligence, apostasy in many parts of the Church, growing  antisemitism, LGBT total take-over, and jihadist Islam, including the ongoing persecution of Christians and clamour for restructuring in Nigeria.  In concluding, Pastor Reuven urged that we keep Jerusalem at the centre of our hearts, since Jerusalem (and the nation of Israel) is at the heart of God’s plan for the earth and the nations.  He however cautioned that Israel (even the Messianic Community) has not yet arrived and is in need of strong intercession.  We must therefore not “glory in Israel in the flesh”, but rather pray for her resurrection from the dead through her King, Yeshua the Messiah.  He concluded on a very sobering note, drawn from Malachi 3:1-3: the coming of the Lord will be preceded by a refining process through which God’s people will literally pass through fire. We should brace up to receive this purification.

Pastor Benjamin capped the story the next day speaking on Home Coming.  Beginning from the expulsion of Adam and Eve from Eden, to Israel’s exile in 70AD, he wove together a beautiful story of several homecomings in the Scriptures and throughout Church history.  This included the ongoing “homecoming” of Israel which began with the establishment of the Jewish state in 1948, and was accentuated with the return of the Temple Mount to Jewish authority in 1967.  Interestingly Benjamin and Reuven themselves are significant part of the history they recount, being leaders in the Messianic Jews community which was birthed in 1967 with the supernatural appearance of Jesus to a number of previous atheist Jews, among whom was Benjamin Berger. Programme anchor, Dr Luthando Dziba described Pastor Benjamin’s presentation as a rich lecture in Church history.

One of our respected elders on the main ALS platform in Nigeria [see the link to join the platform below] recently suggested that a Workshop be convened on the subject of the Rapture.   My personal opinion is that we probably won’t be able to do a better job on that subject than what we already have from this Virtual ALS Conference! Here we have seamlessly woven together Signs of the Time, the Ultimate Homecoming and the important issue of what the Church ought to be doing at such an auspicious time as this – the nitty gritty of redeeming nations for God and His Christ.

Thankfully, we have all these deep teachings recorded for posterity. Here are the links:

PS. To join the Whats’App Group for the ALS in Yorubaland (C.L.A.Y) è https://chat.whatsapp.com/D51WuH4PiCgFpKSAd8fIsg

Posted by CHURCH ARISE! at 2:21 PM No comments:

Church Arise! is pleased to recommend for your participation, the Africa Leadership Summit holding on Saturday 23rd and Sunday 24th October , 2021

Theme: The Quest for Godly Leaders and Righteous Nations.

Find below the Schedule as well as brief Profiles of the main Speakers: 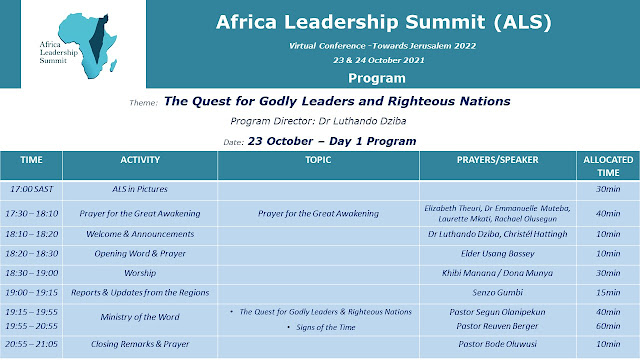 Fifty-four years ago, in the landmark year 1967 when the Jews took control of the Temple Mount after 2000 years of dispersal, the Lord Jesus Christ supernaturally appeared to a largely atheist Benjamin Reuven in his room in Denmark and introduced Himself as Israel’s Messiah.  According to Benjamin: “He just spoke to me and told me that he was the Messsiah of Israel and the God of Abraham, Isaac and Jacob.”  Benjamin was “utterly shocked” firstly that God existed and, secondly that He would come to him in such a personal way.  Soon after,  Benjamin was able to lead his brother Reuven also to the Lord, and the duo for over fifty years have been led by God in the business of grafting the gentile Church back into its Jewish roots. Their interactions in this regard ranged from “a very informal … a very friendly meeting” with the Pope (at the Vatican’s invitation) in 1998 to meetings with former Nazi collaborators (now Christians) at different places in Germany that had hosted concentration camps.

Without any human teacher or mentor available in their unique circumstances, Benjamin and Reuven poured over the Scriptures.  According to Benjamin,  “We spent the time alone, just the two of us, we spent hours and hours together.  Our teacher was the Holy Spirit”.  Now five decades later, they believe that they have “gained an understanding of what is in the heart of God for his church, and the prophetic place of Jerusalem in the end times”.  Trusting in the Lords’ sovereignty and goodness, the Bergers believe that whatever His plan is, “it is not to the exclusion of anybody”, so anybody can be part of God’s programme for the endtime.  They believe that “the church was to be more an expression of community than just a series of meetings”.  And very critically, they believe that this community of believers is to serve as salt and light in the world.  According to Benjamin, God’s people need to “come together to get a vision of the plan of God’s purposes and then live it out to the extent that we can;  to the extent that God gives us the grace to do it.”  This “involves the church worldwide, so that before the second coming of the Lord there will be a Bride that is ready and that will express the fullness of salvation that Jesus brought.”  Pastors Benjamin and Reuven Berger are regular speakers at the Africa Leadership Summit and they live in Jerusalem.  (For more details see the book by Julia Fisher (2004): Israel: The Mystery of Peace. True Stories Demonstrating God’s Road Map for Peace in Israel Today.)

Pastor Segun Olanipekun was called into ministry in 1985 at the early age of 19 with his focus on nations, and has continued to serve the Lord in various capacities since then. In what many considered a bold step of faith, Pastor Segun left Nigeria in 1996, as a missionary to East Africa .  Years later, by the special grace of God he had been enabled to establish deep footprints  especially within the leadership of Church and State in that region before relocating to Pretoria where he now co-pastors (with his wife, Rachel) the Pretoria Christian Centre as well as leads the Institute for Christian Leadership Development. One of the initiatives of the Institute is the Africa Leadership Summit (ALS) which seeks to develop cities and sectors of Africa following a Biblical pattern, leveraging on the Abrahamic Covenant, fostered through a literal connection with Israel.  The Christian Leaders Assembly in Yorubaland (C.L.A.Y) is the expression of the ALS in Yorubaland, and is a prototype being replicated in various geographical locations all over Africa as the Lord opens the door. Pastor Segun conducts and organises seminars around contemporary local and global issues and has travelled to over 25 countries as a guest minister in churches and conferences.  For more details, see https://www.smashwords.com/profile/view/Olusegun

One of the protégés of Pa Sydney Elton, Pastor John AdejoroOluwa is a teacher of the word. For many years, he was a pastor at Foursquare Gospel Church in Lagos, Nigeria, before the Lord called him out to explain the Gospel of the Kingdom. Operating on the platform of the Plummet Mission, Pastor John has published several life-changing books and he hosts the radio programme, “The Power of Endless Life” received across Nigeria and the West Coast. As a missionary and apostolic teacher of the word called to explain the Gospel of the Kingdom, Pastor John travels widely with the message that we need to experience the power of endless life. No doubt infused by the fragrance of the Lord Jesus Christ, John’s teaching ministry can be described by two words: gentle teacher. He teaches at many conferences and in ministry trips in Africa, the UK, America and Canada, being faithful to disseminate the recovery of lost truths of the Faith without apology.

John is an alumnus of the famous Bible College of Wales founded by the Welsh miner, Rees Howells used mightily of God in the last century to ignite revival in Africa and also affect the course of world events through prayer, of whom Norman Grubb wrote the biography, Rees Howells, Intercessor.  Pastor John is on the apostolic leadership of the Africa Leadership Summit. In addition to his busy schedule he is also a columnist in select journals of the faith. John, his wife, Lydia and their five children, live in Lagos, Nigeria.    For more details, see https://johnadejorooluwa.com/

Posted by CHURCH ARISE! at 8:50 PM No comments: