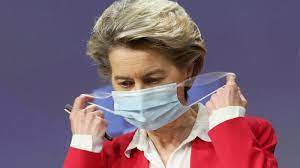 For the first time, the public can now see a copy of the contract agreement between the EU and vaccine manufacturers.  To have a look, click here to see the video clip. (The document view begin around the 3.20 minutes mark.)


The news report below, from euractiv.com provides some background for those not familiar with the development:

“EU lawmakers from the Greens/EFA group have filed a case application to the European Court of Justice stating “implicit refusal” from the Commission to provide access to information in the context of vaccine contracts between the European Commission and vaccine manufacturers.

“Five MEPs of the Greens/EFA submitted the case application on 22 October “after months of correspondence between the Greens/EFA and Commission, during which the Commission did not agree to provide transparent access to the contracts,” according to a press release published on Friday (29 October).

“Kimberly van Sparrentak, a Dutch MEP, said it had been nine months since the Commission was formally asked for access to the full set of advance purchase contracts for vaccines.

““For nine months the Commission has refused to disclose them, but after being heavily criticised for the opacity of its vaccine policy, they have published heavily redacted contracts,” she said adding that it is “clearly insufficient”.”

https://www.euractiv.com/section/coronavirus/news/meps-vs-commission-in-court-over-vaccine-contracts/
Posted by CHURCH ARISE! at 4:55 AM