Transgender madness reaches climax. Or has it?


Surely the transgender mania will have to reach its peak and begin to backfire some day, sooner than later!
Transgenderism, a subset of the homosexual lobby trying to grey out the differences between the male and female genders, is one clear manifestation of the dramatic impacts of belief in the evolution theory.  Unfortunately, too many people suppose the evolution theory is nothing more than mere theoretical academic exercise.
Denying the existence of an all-wise perfect Creator, transgenders insist they are trapped in the wrong physical bodies, by errors of evolution.  Thus, we have some ladies claiming they have just discovered that they are men in every other way, except for the feminine bodies they inhabit, and vice-versa.  And the militant egg-heads professing the theory of evolution in the Universities, are very vocal in cooking up scientific credence for such pitiable confusion. Quashed are common sense, and even myriads of factual scientific evidences, (see a recent one here http://www.churchmilitant.com/news/article/transgenderism-linked-to-suicide) that clearly confirm transgenders are in abnormal mental state.
We reported in Vol 17 Quarter 4 the ensuing confusions as groups of men barged in into the Twilight Room Annex bar in Portland and requested to use the ladies restroom, claiming that, contrary to their physical macho appearance, they are actually ladies inside (http://churcharise.blogspot.com.ng/2014/12/gay-advocates-on-rampage-in-us-from.html).  That event not only led to some physical altercation, but left a fine of $400,000 on the head of bar owner, Chris Penner, for denying due rights to the 11 transgenders.
In the case of transgender Wyatt Maines, the school authority actually recognized “her” new identity and conceded “she” could be using the female Staff restroom.  “She” however insisted on using the female students restroom like every other female student.  For their hesitation to concede that ground, the Court found the school district irresponsible and fined it a whooping $75,000. (http://churcharise.blogspot.com.ng/2014/12/court-orders-school-district-to-pay.html)
But what amounted to trickles of stand-offs between rights-demanding transgenders and the rest of society is now turning into torrents.  And western societies, enlightened as they have become, keep making concessions that primitive, less enlightened societies must find baffling.
The latest report is from New York where failure to respect the ever bourgeoning “rights” of the transgender can prove very expensive indeed.  In the new series of rights, purposefully failing to address a transgender by his/her declared title could attract as much as a fine of 250,000 dollars!
Some of these rights are clearly specified in the new “guidelines”  from The New York City Commission on Human Rights (NYCHRL).  One states that “the NYCHR requires employers and covered entities to use an individual’s preferred name, pronoun and title (e.g., Ms./Mrs.) regardless of the individual’s sex assigned at birth, anatomy, gender, medical history, appearance, or the sex indicated on the individual’s identification”
One immediate problem this is generating is that some “transgender and gender non-conforming people” are evolving other titles and pronouns of their fancy. For instance instead of the regular he/him/his or she/her/hers, some individuals insist on being addressed using they/them/theirs or  even as ze/hir!  What a tough job it must be living with a dozen transgenders each choosing, at the pain of 250,000 dollars to me, how they may be peculiarly addressed!
Similarly “The NYCHRL requires that individuals be permitted to use single-sex facilities, such as bathrooms or locker rooms, and participate in single-sex programs, consistent with their gender, regardless of their sex assigned at birth, anatomy, medical history, appearance, or the sex indicated on their identification.”
This can only be America!
The obvious question is, where would all these end!
Meanwhile, the evolutionary lobby that is behind it all is in near frenzy, convincing more and more people of their need to change their gender to find “fulfilment” in themselves.  Feeling somewhat depressed? Consider a gender change!
In the UK a recent report states that about 80 primary school pupils a year, are seeking to “transition” to another gender!  Schools who resist demands from pupils to be treated as genders different from their physical appearance are thoroughly lambasted and harassed into line by “experts” from Evolution –affirming advocacy groups.
There is at least a top NGO, Mermaids Charity, which goes about encouraging pupils – as young as four years - to try “transitioning” as a cure to whatever psychological or social problems they are supposed to be having. Not surprisingly, the process is becoming self-sustaining as pupils are now reportedly recruiting other pupils.  One wonders what the parents of such “pupils” are doing, if it is fellow kids who now give counsel on overcoming “life’s problems”!  (Please see the article on the Bodnariu family from Norway on page 1 to see what could happen to non-conforming parents once ungodly practices as these already become mainstream in society.)
Meanwhile, the Mermaids Charity has proudly announced her observations that decisions are increasingly now being made in “clusters.”  With the media proudly and forcefully supporting these developments, and government footing the bills for the sex-change surgeries and other treatments, one wonders if other Charities/NGOs might be able to rise up in that culture to speak against this obvious collective madness.  One report here confirms that NHS child transgender referrals have soared. Please see pitiful details at http://www.telegraph.co.uk/education/educationnews/12070632/80-primary-school-pupils-a-year-seeking-help-to-change-gender-charity.html 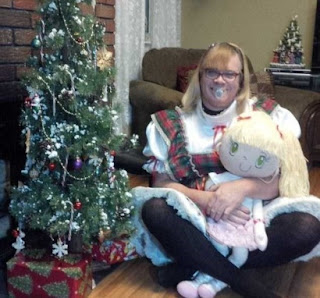 But if we describe as pitiful, the coaxing of children and teenagers to think they are living in wrong bodies, and being encouraged to switch to another gender (where of course, they are guaranteed a sterile life), how does one respond to the case of a 52 year old married man, dumping his wife and 7 children, claiming he is actually a six-    year old girl?
Paul Wolschtt of Toronto has been adopted by two “caring parents” and as seen in the picture here, he/she wears children’s dresses and plays with baby dolls together with the youngest gradchildren of his adopted parents . “I have moved on forward” he smirks. See nauseating details here. (52-Year-Old ‘Transgender’ Man Leaves Wife, Seven Children to Live as Six-Year-Old Girl)
.

Email ThisBlogThis!Share to TwitterShare to FacebookShare to Pinterest
Labels: 1