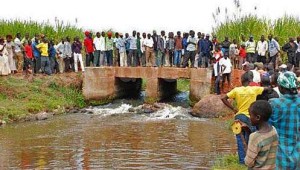 Early in the morning of Wednesday Dec 23, just two days to Christmas, Pastor Bongo Martin received a phone call from a Church member that Muslims were removing boundary marks between the church and a mosque, and erecting new barbed wire fence. On arriving the scene, the imam who led the task force reminded Pastor Bongo that he had been previously asked to move his church away from their neighbourhood.  Thereafter, one Abdulhakha Mugen drew his sword and struck the pastor’s neck. A few more sword blows and 32 year old Pastor Bongo was finally decapitated. His body was summarily thrown into the river – in broad day light! The event happened at Nansololo village near Mazuba, in Namudumba District See details and picture here This is only part of a series of all-year-round gruel violence in Eastern Uganda.
The story of Hajii Suleiman Sajjabi a convert from Islam in Kachomo village, Budaka district of East Uganda is equally saddening. Though having received Christ two years earlier, Sajjabi continued to attend the local Mosque and has been able to systematically win over members of his family and a few neighbours to Christ. In secret, for fear of the aggressive muslim majority, he organizes Bible study cum luncheon for his converts.  During the Bible Study of Friday Dec 18, agents from the local mosque succeeded in introducing a toxic pesticide into the meal, leading to the death of five of the converts, one of them a pregnant lady. Sajjabi himself went into coma. About a week earlier, the imam at the local Kaderuna mosque had written a letter rebuking Sajjabi for his covert missionary activities. He had written: “Please be informed that we have known of your deception, and we cannot take this lightly…. You should stop trying to change the Muslims to Christianity in the name of providing support to our members of the Muslim ummah.”
Another incident from Eastern Uganda in December was the ambushing of Ismail Kuloba, another convert from Islam. A policeman, Ismail received an urgent call to intervene in a crisis that  was supposedly brewing in the locality. Unfortunately it was all a trap. Ismail ran into an ambush laid by about 20 Muslim extremists.  According to Morning Start News,  one of the assailants, Mudangha Kasimu, threw a stone that hit Kuloba in the forehead. Kasimu then shot him twice in the head, to the shouting of “Allah Akbar ” by the others. He died on the spot.
For more details please check http://morningstarnews.org/2015/12/pastor-hacked-to-death-bible-study-members-poisoned-in-eastern-uganda/
Posted by CHURCH ARISE! at 5:12 PM