Norway seizes five Children from parents, and puts them up for adoption over alleged Christian Indoctrination 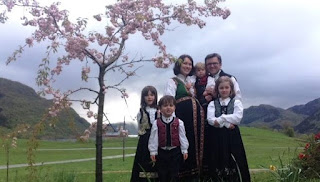 The Norwegian agency for child welfare services, the Barnevernet, has seized all five children of Marius and Ruth Bodnariu, and put them up for adoption, allegedly, because the children were being  “indoctrinated” into Christianity.
As reported by Christian News Net, and other internet sources, on Monday Nov. 16 2015, officials from the Barnevernet, went to Vevring School in Naustdal to interrogate the two Bodnariu girls, Eliana (9) and Naomi (7). The visit was at the instance of the Principal who was concerned that the brilliant and active girls risked being psychologically “handicapped” through the Christian “indoctrination” they were receiving at home.
Specifically, the girls, who sometime sing Christian songs at school (a practice  apparently not expected at a public school in Norway) were being taught by their parents and grandmother that God punishes sin!  In inviting the Barnevernet, the Principal clearly expressed her conviction that the children were not being subjected to any physical abuse at home.  She requested only that the parents would be counselled and corrected with respect to what she considered their “radical” Christian teaching on sin being offensive to God.
However, the Bodnarius  only learnt about the whole issue when officials of the Barnevernet arrived their home, together with police officers, to also take into custody, the two younger boys (Mathew – 5yrs, and John – 2yrs)!  The Barnevernet returned yet again the next day to pick up 4 month old baby Ezekiel into custody.  Indeed, Marius and Ruth themselves were temporarily put into custody, but were released when they were deemed to be non-violent.
On Nov. 18, the Barnevernet announced to Ruth Bodnariu that the children had been split up and were being cared for by three different families.
When the school principal saw that the actions of the Barnevernet were far in excess of her complaints, she stopped cooperating with the officials.  However, that was too late, as apparently, she was no longer needed for the Barnevernet to continue with their agenda.
Marius Bodnariu’s brother, Daniel, who is a pastor, has written a statement providing more details relevant to the case.  For instance, it is quite clear that Marius and Ruth were loving parents who especially love children.  In fact the couple first met while serving (Ruth as a volunteer) at a Foundation for homeless children. Their house was full of various toys and musical instruments bought to facilitate sound development of the children, and they regularly took their children on foreign vacations, including to the Disneyland in the US. It is utterly preposterous suggesting they were abusive or psychopathic!
So far, all legal efforts by the Bodnarius to have their children returned have failed, while the Barnevernet stridently goes on with procedures to have the children taken up for adoption. At the hearing on November 30, the judge ruled that the Bodnarius may visit baby Ezekiel  for two hours twice a week, the older boys once a week, but never to visit the girls at all. https://en.wikipedia.org/wiki/Child_Welfare_Services_%28Norway%29#Bodnariu_case
However, actually it wasn’t until 3rd December that Marius and Ruth first got to know the actual, official nature of the charges against them. The careful and extensive medical and physical checks on the children (including X-ray and CT scans) had failed to produce any iota of evidence that the children were being abused. Nevertheless, the Barnevernet latched onto the supposed statements by the two girls that on occasions when they did wrong, their father has had cause to spank them with his “fist and feet”.
As for baby Ezekiel, the Barnevernet cited a statement supposedly made by one of the girls alleging physical abuse on a particular occasion.  According to the Barnevernet: “the baby was shaken by the father as a rag, the mother didn’t react nor report the father’s actions, as such there is no support for the children and they are in danger.”
Marius very well recalled the incident.  An otherwise joyful occasion for him, as baby Ezekiel made his first moves at grabbing objects.  He reached for his daddy’s glasses, and the man responded with joy over the child.  Perhaps one of the girls, under intense probing referred to that as violence, and the Barnevernet has latched on to that, discountenancing the reasonable explanations from the parents.  Of course, it is instructive that in “civilized” countries, the citizens are deemed so irresponsible that government officials would demand of them explanations of how they even play with their own babies!
Subsequently it was suggested to a highly traumatised Ruth that she might be able to get her children back quite quickly if she would give a written declaration reporting Marius as violent and physically abusive!  Ruth firmly rejected the obnoxious but meant-to-be-helpful suggestion!
It’s encouraging that many outraged people all across the world are protesting the ugly developments.  International protest on behalf of the beleaguered Bodnuri family is building via


Facebook while physical demonstrations at the Norwegian embassies are planned in 24 countries so far, including Russia, Poland, India, Slovakia, Denmark, Ireland, Romania, England, Czech, Belgium, Germany as well as in the USA and Canada.


Church Arise! urges readers in Nigeria to kindly take the time to send in a note to the Norwegian embassy at Abuja to express their dismay at this development, and request for the immediate return of the Bodnariu children to their family. Your polite but firm letter should be addressed to The Ambassador, Royal Norwegian Embassy in Abuja, 54, T.Y. Danjuma Street, Asokoro, Abuja, Nigeria.  Emails may be sent through:   emb.abuja@mfa.no. (see a sample of the one we sent in on our blog, http://churcharise.blogspot.com.ng/2016/01/appeal-to-ambassador-of-norway-in.html)
In the meantime, the Romania Insider reports that Norwegian authorities have opened the adoption process for the children – even while the case is yet to be properly heard at Court.  In a similar case some two years ago, the Radulescu family, won their case against the Barnevernet at the Supreme Court of Norway. Barnevernet however, allegedly is still keeping the children at fosters’ while going ahead with the process of adoption. The agency is reportedly arguing that “such a long time has passed and now it is going to be traumatic for the children to be returned to their parents."  They might be hoping for a similar argument in this case.
According to Wikipedia, “Norway, like most of Scandinavia, is very liberal in regard to lesbian, gay, bisexual, transgender (LGBT) rights and it indeed was the first country in the world to enact an anti-discrimination law protecting homosexuals in certain areas “ https://en.wikipedia.org/wiki/LGBT_rights_in_Norway. Transgenders are required to be sterilized and so, with increasing numbers of transgenders and homosexuals getting married, the only avenue for them to get children (mainly for indoctrination into LGBT lifestyle) is by adoption.  There is clearly considerable pressure to get highly intelligent children like the Bodnariu’s in the adoption market. Hence, despite the large international outrage generated, this case might still take a good while and a good fight before Marius and Ruth would get back their children.
Read more at http://www.christianpost.com/news/norway-five-christian-children-seized-government-foster-care-adoption-process-153771/