Below is an advert for Jan Markel new teaching DVD on the New World Order.  Jan, by the grace of God, is one of the leading Bible Prophecy teachers of our generation.  From https://olivetreeviews.org

"In 2017 I made a DVD teaching on the rush to the one-world system: The New World Order. Things changed -- and advanced -- so much in two years, that I re-made the DVD a few weeks ago.

"The New World Order is just code for a one-world system. And the plans for this behemoth system are hidden in plain view. It's a five-thousand year scheme. This is not a stealth effort. 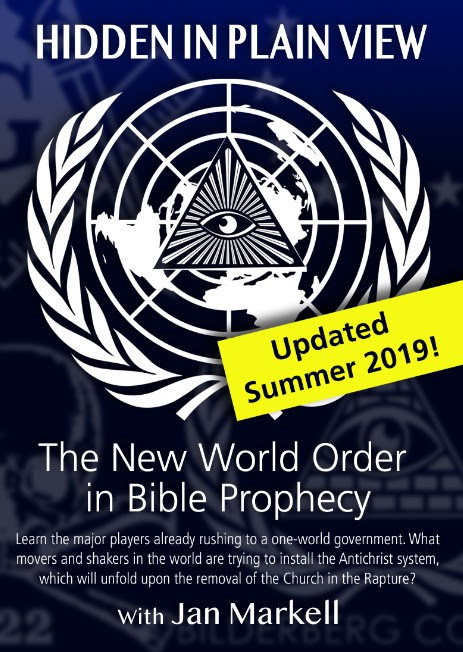 Find a trailer here:
Nimrod was the first globalist and how did the Babylonian system work out?  None of the ensuing efforts will succeed either! But, here are the players.


Where there is an asterisk, this is all-new information:

Choreographed 8-hour globalist ceremony, June, 2016, celebrated by world leaders at the Gotthard-Base Tunnel.
No, the believer does not have to fear the impending globalist system but the obvious nearness of its implementation should remind us that the King is coming any day. This system is ready to be birthed. It's called the Time of Jacob's Trouble, Daniel's 70th Week, or the Tribulation.

And God sits in the Heavens and laughs at these scheming men who haven't been able to make it work since Babylon! (Psalm 2:1-6) God allows them seven ignominious years where the result is hell on earth, because they have left God out of the equation!

Jesus Christ will install perfect global government. It is called the Millennium.