ICC IS HELPING NIGERIA IN HER CRITICAL TIMES 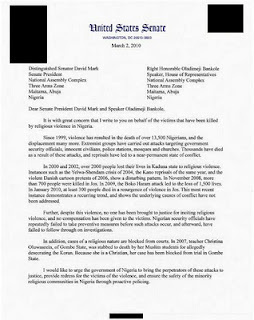 These days are certainly VERY CRITICAL for our beloved country, Nigeria. And one foreign organization that is actively playing a pivotal role has been the Washington DC -based International Christian Concern ICC.

For Nigeria to realize the fulfilment of the promised Jubilee which is due at this time (Lev 25:10), Power, as they say, must change hands. While the on-going ripples (storm?) at the Presidency and Federal Executive Council, are quite visible, it would appear all these are actually only preparing the grounds to allow for more fundamental power shifts to occur.

There is a power that has been responsible for the care-free shedding of the blood of over 13,000 Nigerians, mainly in Northern Nigeria under the platform of Islam, since the new democratic dispensation, which unexpectedly ushered in a Christian in 1999. That power has managed to continue to flourish, as, despite the flagrant abuses,no one has dared demand it be subject to the Constitution of the Land.

All that is about changing now, as the International Christian Concern has launched a sustained and intensifying campaign, making the simple demand that those who murder innocent men, women and children should be brought to justice in line with the nation's constitution! Powerful interests are being rallied round this demand, and the government structure in Nigeria is currently divinely positioned (as never before) to acceed to these demands. Now, the ICC is appealing that everyone who is able, should help give publicity to the efforts. This is certainly the minimum and genuine peace-loving and Jubilee-anticipating Nigerian can do!

Below is a copy of a letter sent by an influential US senator to the leaders of Nigeria's Legislature on the matter:

Please check the details of these efforts at http://www.persecution.org/slaughter/

Samples of the Coverage:
Setting the ‘revenge’ story straight.

Why are women and children being targeted? Why were the attackers wearing military uniforms? Was is it really a Muslim village that was attacked in January?

ICC’s President, Jeff King, interviewed CSW Nigeria representatives to find out the real story on the ground in Nigeria. Check out our full audio interview above (just click play!) to hear their answers to some important questions like these:

Why women and children? http://www.persecution.org/slaughter/

Why were the attackers wearing military uniforms? http://www.persecution.org/slaughter/


The media is calling these attacks revenge for a January attack by Christians on the Muslim village Kuru Karama. What’s the real story?

“The Kuru Karama story has still not been proven. I know Al Jazeera and, I think, Human Rights Watch, spread this story because they were informed by random Muslims on the ground that this was an attack on a Muslim village by Christian militias or Christian youths that ended up with Muslims being stuffed into wells and Muslim houses burned.

He actually had to flee from the area… and he also relates that houses that were burnt and shown as Muslim, were actually Christian. And that some of the bodies were Christian. So it was not a massacre of 150 Muslims by Christians. http://www.persecution.org/slaughter/

… The fact that [the January attack] is now being used to stoke up hatred… I think those who, first of all, came up with that story, need to go back to the whole source and correct what they said.”
http://www.persecution.org/slaughter/
Mar 17 2010

The attackers, who were dressed in military attire, removed the baby from the belly of a pregnant woman and cut out the tongues of their victims. The Muslims murdered three children, four teenage girls, three women (including the one pregnant woman) and two men. They also injured six Christians and burned down four houses.

“Our restraint is taken for weakness. The security is not protecting life and property of Christians. This is a religious war. The military is helping the Muslim people. We have evidence about the Military helping the Muslims. We ask the government to withdraw the military and allow the police to take over the security,” said Reverend Chuwang Avou. Reverend Avou is the General Secretary of the Christian Association of Nigeria in Plateau State.

This latest attack came on the heels of another jihad attack just ten days ago in the village of Dogo Nahawa in which 500 people, mainly Christian women and children, were slaughtered by Muslims. Over 13,750 Christians have been killed by Muslims in northern Nigeria since the introduction of Sharia law in 2001.

ICC’s Regional Manager for Africa, Jonathan Racho, said “We are deeply saddened by the latest jihad attack against defenseless Christians in Nigeria. Women and children have born the brunt of Muslim aggression. This demonstrates the senselessness of the attacks and the cruelty of the attackers. Unfortunately, the media and politicians wrongly label the attacks as ethnic violence instead of telling the truth about the ruthless Islamic jihad attack that is bent on driving Christians from northern Nigeria.”

Please go to www.house.gov to find contact information for your representatives and tell them to pressure Nigerian officials to bring the perpetrators of the attacks to justice and protect vulnerable Christians from further violence.
http://www.persecution.org/slaughter/
Posted by CHURCH ARISE! at 1:19 PM